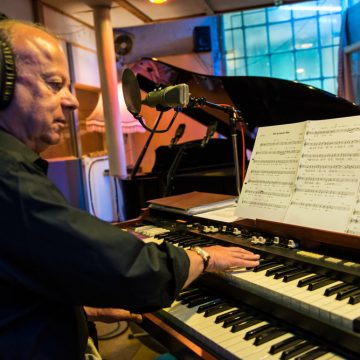 John began singing and playing in bands in his teens, but in those days was playing guitar and bass guitar. He began to play the organ in his early 20s and started gigging with a Jennings 3 manual portable organ, playing bass on the bass pedals and working with only a drummer. He graduated to a Hammond M100 and Leslie 760 a few years later, keeping them until relatively recently and now plays two full rigs – a Hammond XK33c and a Hammond XK5, through a Leslie 3300 and a modified Motionsound Pro 145.  He is the vocalist with the band.

A professional career in the City kept him away from playing music until Steve Rubie of London’s 606 Club suggested, towards the end of 2009, that he put a band together and played a gig in the Club. And so the John East Project was born.